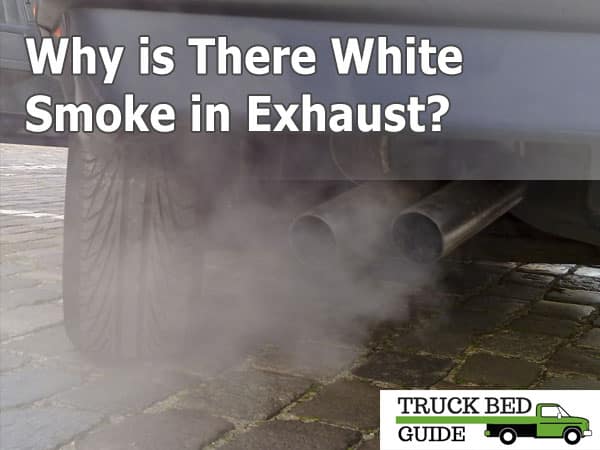 Any change in the color of the smoke from the exhaust is a sign of some problem in the engine. But white smoke is instead the most common type of question among truck owners and everyone experiences it at least once in their lifetime. Today, in this article, we will discuss the reason behind getting white smoke in your exhaust. It could be happening even when you are ideal.

Why is There White Smoke in Exhaust? If your car is blowing out white smoke, the possible reasons could be an oil leak, cracked cylinder head, fault in the engine control unit, faulty fuel pump injector, or cracked engine block.

What is the White Smoke?

The white smoke is the result of condensation building up inside the exhaust system. The issue of your car now depends on the thickness of the white smoke. If it’s like a thin vapor, there probably is nothing to worry but a thicker smoke could mean a lot of trouble.

If there is a fault in the engine coolant, there is a high chance of having white smoke both from the exhaust and between the cab and the bed. This could easily lead to big problems such as blown out head gasket, cylinder head damage, or something else which can cost you a lot of dollars. This is something that shouldn’t be ignored, especially if it’s a coolant leak; big or small it could lead to significant issues.

SEE ALSO:  Will RZR fit in your truck bed?

Coolant reservoir tank could quickly be leaking without you knowing it. Although it is not common, it can very well happen if the container is damaged or cracked. It is more likely to occur during your pickup maintenance when the mechanic might accidentally damage the tank. Whatever the reason, you will have to replace the reservoir tank if that’s the problem.

A broken cylinder heat could also leak out coolant which will release a white smoke through the exhaust. Your car doesn’t even need a big crack, all it needs is a little bit of coolant to leak out and mix with the engine oil to produce its signature smoke. This will contaminate the oil, and the first sign of contaminated fuel is the white smoke coming from the tailpipe. With a prolonged leakage, the smoke will start to produce a sweet odor which might linger for a long time.

If oil leaks out of the piston rings or valve seals, it will flow into the combustion chamber along with the fuel. After the fuel and oil get mixed up, they will produce white smoke and may even produce a not-so-common blue smoke from the tailpipe. You should address this issue faster because there’s a high chance that your engine parts will get worn out or damaged quickly if they are not appropriately lubricated. This will further lead to other expensive problems shortly.

This is a common problem among diesel engines. The fuel pump injector is responsible for injecting fuel into the IC engine at the right time, i.e. when the piston is up. However, with a bad fuel pump injector, the fuel doesn’t get into the chamber at the right moment, and as a result, it produces a thick white smoke coming out of the tailpipe.

SEE ALSO:  How to install a fuel cell in a truck bed

If you have got a malfunctioning engine control unit, it will mismatch the timing of the fuel pump injector. It doesn’t necessarily mean the inject is faulty, and it merely means the control unit doesn’t know when you inject fuel. All you have to do is reprogram the engine control unit so that it can self correct the timing of the injector. However, you may have to visit your dealer to get this done because it demands experienced mechanics who are familiar with your vehicle’s engine and reprogram the system.

This is the worst case scenario where your engine block is cracked. This is probably the most expensive to fix all possible reasons. But then again there are many other reasons which could be causing that thick white smoke, for which you will need an experienced mechanic to look over it.

What Can You Do at Home to Fix White Smoke From Exhaust?

Remove the intake manifold and examine the gasket. If you find a leak or rust, then it’s time to repair it.

Check the head gasket only in case the intake gasket is working well. If this part is damaged, it will let coolant enter into the chamber, thereby creating white smoke.

Crack In The Cylinder Head:

It is primarily made of aluminum, so it is prone to breaking when overheated. If you find it broken, you have to replace it with a new one.

Is White Smoke Normal for Exhaust?

A thin white smoke is of not much concern as it could just be because of normal condensation buildup inside the exhaust system. This type of smoke disappears quickly over the day.

SEE ALSO:  How to Make a Wooden Truck Bed Trailer? A complete Guide

Can You Still Drive With a Blown Head Gasket?

It is not recommended to drive with a blown head gasket because the leaking coolant and the gases can cause high temperature, thereby leading to erosion or possible cracking. However, you can make a quick fix and keep your car running for a while.

What is the Cause of Grey Exhaust Smoke?

A thick grey or blue exhaust smoke indicates the presence of burning oil in the IC engine. It can use a lot of problems such as reduced fuel economy to problems in acceleration. It is primarily because the oil is somehow leaking into the IC chamber.

What Causes White Smoke When Accelerating?

It could either be because of transmission fluid or burning coolant. If the engine is sucking in transmission fluid through the vacuum hose, it will produce white smoke and will have burned oil odor. If it’s because of the coolant, it suggests that there is a crack in the cylinder head or a leaky head gasket.

There is no reason to overlook the white smoke issue as it will not only affect your vehicle’s performance but may also cause or accelerate further damages. It will cause problems both for you and for other drivers as well.

That said, pickup drivers should stay calm in such conditions, and call an expert for help if the car breaks down in the middle of the road. Moreover, you should be keeping an eye on these issues every day to reduce any further damages.