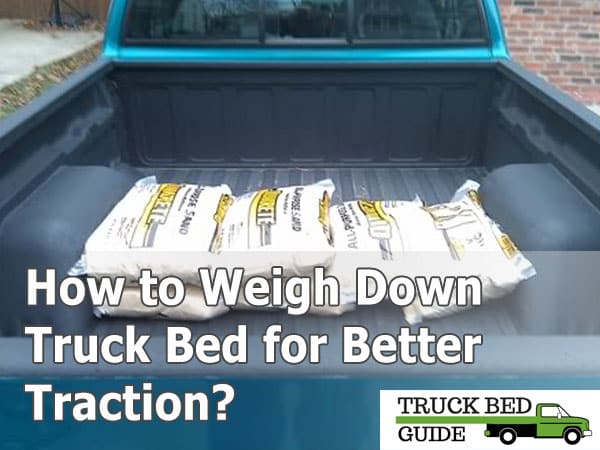 Pickups can definitely carry heavy loads, after all, it is what it’s made for. But the bed itself is quite light and in slippery winters it gets tough driving where the rear wheel doesn’t get enough traction. When the bed is empty it doesn’t provide enough traction to the back axle for which drivers can oftentimes lose control of the rear wheel because of slippery roads. In this scenario, weighing down the back of the truck would be a good option and there are a few ways to do that.

How to Weigh Down Truck Bed for Better Traction? To increase traction in the winter you can weight down the rear of the truck by laying a few pounds of sandbags, or rock salt or gravel right on the axle. This will give you that added traction and also faster braking power.

Get a couple of sandbags and fill it up with either sands or some concrete blocks or bricks or pebbles. I think sands and bricks will be enough to provide the needed traction. You could also purchase a couple of plastic sacks and then just fill it up with water to weigh down the back of the truck.

Now place those weights directly on top of the rear axle. Putting them behind the axle is rather damaging as it could lift the front end and reduce traction in the front-wheel. On the other hand, a water-filled truck weight is rather safe as it lays flat on the bed and covers a larger area. You just have to place it on the truck and fill it up with water from a garden hose.

SEE ALSO:  How to build a truck bed camper

The next important step is to fix or secure those weights in their position so that when you brake suddenly it doesn’t fly through the back windshield and drop on someone’s head. Or when you reverse and stop abruptly it could just fly out the tailgate and land on someone else cab. Because they are loose bags, they will definitely tend to slide around when driving in normal condition.

To avoid it, you have tied a few ropes through the holes in the blocks or the grommets in case of a water bag. Then tie the other end around the tie-down points in the truck bed. Among all, sandbags are going to be the toughest to hold back, so you have to wrap the sandbag multiple times with a rope and then tie it to anchor points or the frame of the truck.

Now take you to pick up on a drive in the winter morning and see if the weights are enough to provide traction. You would definitely feel if the weight is lower or is too much. Next, it shouldn’t be impeding our handling capabilities. Plus, make sure to check your mileage with the weights on the back of the truck. Then repeat the above steps until you find the right weights for your traction.

It should be put right next to the wheel wells in a pickup truck bed.

How Much Weight Should Your Add to the Back of the Truck?

How it Affects the Stopping Power?

SEE ALSO:  How to Make a Wooden Truck Bed Trailer? A complete Guide

Your Options for Materials

You could purchase up to 70 lbs of tube-shaped sandbags which may come for just under $5 from hardware stores. They are a very good option to fill up with sands or salts or rocks. Other common materials used include potting soil, rock salt, cat litter, gravel, etc. cat litter can be used to sprinkle on the ground to help you get traction when you are stuck in the snow. Many would leave their fifth wheel to the hitch which can add up to 250 pounds of extra weight. Some keep their gas tank full, which can help you add nearly 100 lbs of weight easily. You also have the option to purchase water-bladder traction aids which can cost up to $200.

Make sure you don’t have any of that each plastic bags or burlaps because they will disintegrate over time and the stuff inside the bag will be all over the truck bed, which is an added headache to clean the bed. In this case, a double-wrapped bag would be a good option that can last the whole winter.

For sandbags, you can use a wooden enclosure around the wheel wells to keep the weights in place at all times even at higher speeds.

Many have the advantage of not adding any weight at all if they have accessories such as a toolbox, which they can fill up with their tools and gear to give the added traction.

Are Heavier Cars Better in the Snow?

Yes, heavier cars can have better traction than lighter cars. It’s just about the extra weight but the tires of heavier cars have specific tread patterns that help with snow traction.

Is 4WD Better than RWD in Winter?

Yes, a 4WD has a better chance of getting traction than an RWD. It is definitely better for serious off-roading and driving in slippery winters. Otherwise, it’s a waste of money and power. For that matter, an FRD is also better than an RWD in winter.

Can I Drive With Winter Tires Year Round?

No, it is not advised to drive year round with winter tires. The tread rubber of winter tires is more flexible than all-season tires, which adds traction in winter but wears down faster in warm summer.

Can I Put Winter Tires Only in the Front?

When Should You Put On Snow Tires?

The usual time to put on snow tires is between late November to early April. To maximize their tread life, you should be using it only in the winters.

Now that you know how to weigh down your pickup you have to follow some ground rules; such as you should use railroads which are common as they can become dangerous projectiles in case of an accident and cause a lot more damage to people around you than it should have. Don’t just fill up the truck with sand or snow without bagging them as they would fly out while driving thereby causing obstruction for drivers behind you. To save gas mileage it is better to drive with the weight on only in case of lost traction, otherwise, you should be driving normally as it is. I hope this blog has helped you solve at least one problem regarding pickup truck beds, good luck on your venture till we meet with a new blog.