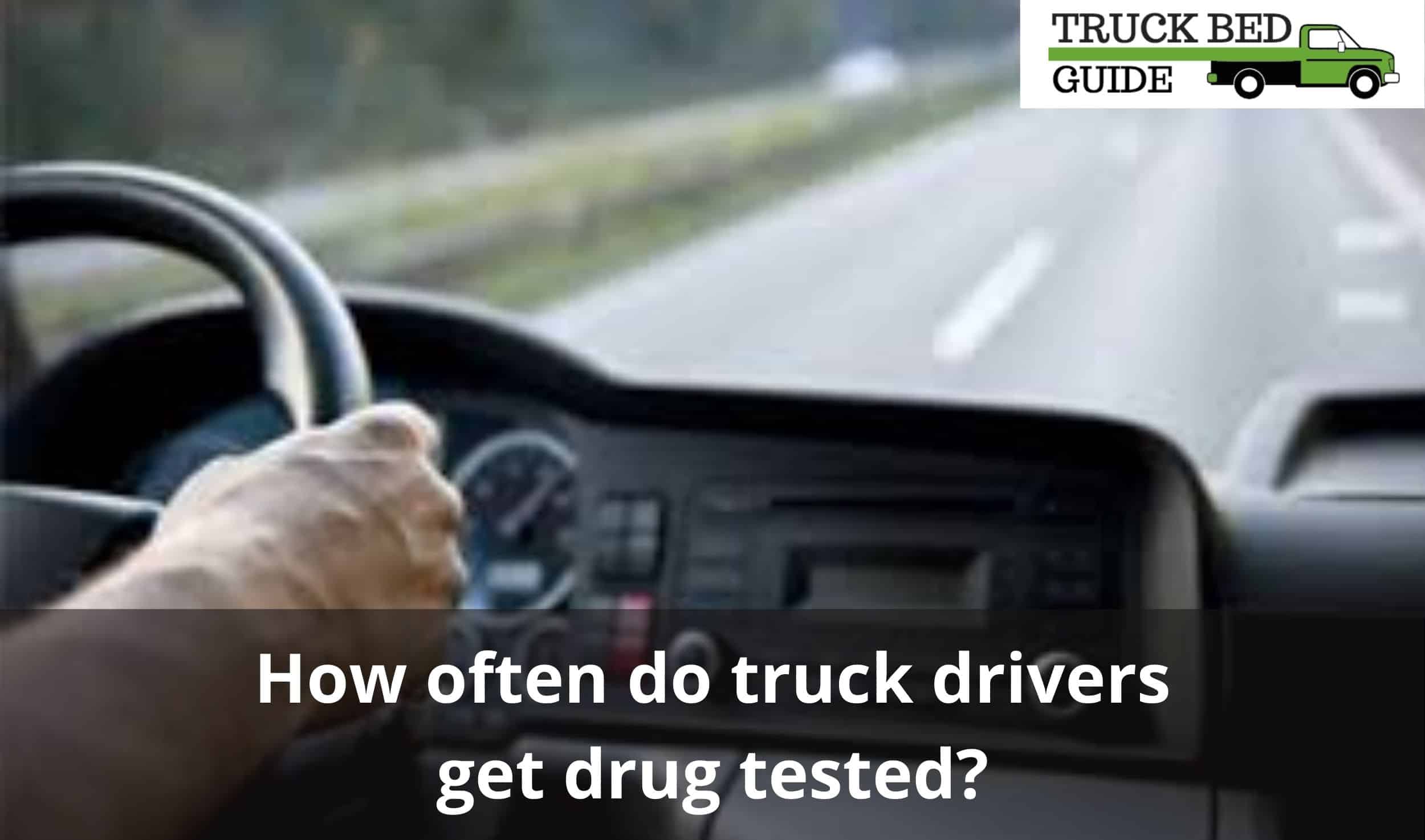 Usually, the DOT drug test is different from other drug tests you may have done, which does urine test that involves testing of the urine sample of the concerned driver for drugs and a breathalyser for alcohol. However, this drug test does not have rapid or instant results as all samples undergo thorough different procedures to obtain the most accurate results. The drug test follows a five-panel test which includes:

Similarly, the DOT breathalyser tests include the test for Alcohol concentration levels of .004 or above. Some people may have traces of alcohol or drugs that appear in their tests even 30 days after their last use. In this case, you need to be honest with the employer if drug or alcohol traces are found in your test. You have to keep your standards high while driving commercial vehicles on the road. So, let know how often do truck drivers get drug tested.

In the past, urine testing was accepted protocol at all trucking companies. Vice News reports that a new federal bill aims to require hair follicle testing for truck drivers (2016).

Testing the hair is considered to be more reliable than urine testing, since many types of illegal substances remain in hair follicles longer than they remain in the body. In 2008, J.B. Hunt established its own hair testing policy. Since then, they have not had any post-accident positive drug tests.

Whether or not this procedure becomes federal law, the number of companies that use this type of testing may increase in coming years.

Know How Often Do truck drivers get drug tested?

Any individual having a Commercial Driver’s License (CDL), drives vehicles that carry more than 16 people or transport heavy materials is required to comply with drug tests. Truck driver drug testing helps discourage employees from using drugs and alcohol. As a driver you need to follow the laws and regulations of transportation and logistics industry to keep the roads safe. Most employers also help employees by recognising early and appropriate alcohol and drug problems. A safety-sensitive employee can be a responsible truck driver, train operator, airline crew, or individuals working on pipelines.

If you want to work for a trucking company after getting a CDL, then you have to pass a drug screen test. According to the Federal Motor Carrier Safety Administration, it is legally mandatory for the trucking employers to test all drivers before allowing them to operate a commercial vehicle (2016).

This process may also involve random drug tests. Employers have to administer a specific amount of random drug tests each year, which total to 10% or more of the average number of driver positions in the company. Owner operators should be and must be part of a random drug testing consortium and undergo a random testing procedure with two or more other drivers (FMCSA, 2016).

The typical truck driving drug test looks includes tests like amphetamines, cocaine, marijuana, opiates, and PCP. Tests follow established guidelines for each drug, and testing above the approved level for any of them results in a positive drug screen.

When do you get drug tested in trucking industry?

There are so many occasions when the truck driver may undergo drug testing procedure, the first one being the pre-employment drug test.  The trucking company does a drug test and background check during the hiring process.

When you are hired by a trucking company, the company may ask you to undergo another drug test if they suspect you in any way. If your higher authorities suspect you to have drugged or used alcohol on and off the road, then you may have to perform a drug test. In this case, you need to produce required evidences to defend their accusation such as concerning appearance, smell, and speech.

SEE ALSO:  Can I Drive a Truck Without the Bed? -The Complete Legal Guide

During your time as a truck driver, you will also have to perform random drug tests, which is done quarterly. These tests need to be done with a random selection rule and all employees are given an equal chance to be tested.

Preparing for a drug test

The drug test involves a urine sample; hence, it is important to drink lot water and other drinkable liquids. You also need to talk to your doctor regarding your legal prescription medications. In some cases, the prescriptions may cause a false positive on a drug test. In such cases, you need to schedule a follow-up drug test and provide your prescription information. The only thing you need to do is to abstain yourself from drugs and alcohol as these tests are a perfect way to keep people safe from accidents.

What happens if a truck driver fails in the drug test?

If you fail your trucking drug test, then you will not be fired from the job immediately. However, the issue still remains to be very serious and that’s why you may be suspended from the job for some time. There are also other penalties that you can face like having removed your license or losing your certification. In this case also, you need to undergo various return-to-duty drug tests and screenings. You are also required to work with a Substance Abuse Professional (SAP) for guidance.

You may be fired from your job if your drug test does not fulfil the required drug testing criteria because it is extremely harmful to yourself and others. Abstaining from drugs and alcohol will help you stay protected from losing your job and life as well.

How long does a failed drug test stay on the record?

Generally, a positive drug test stays on the record until a truck driver completes the return-to-duty drug testing and screening process. After that, the violation will continue to stay on your CDL Clearinghouse for five years. A CDL Clearinghouse is an online database, which provides government agencies and employers with real-time access to information about your CDL driver drug and alcohol program violations. One can view your DOT drug test results only with your consent. However, if you refuse to access your drug test reports, then you may lose opportunities.

SEE ALSO:  How to remove a tonneau cover

Drug testing of a truck driver is an invaluable way to prevent future damage and loss on the road. As a driver, you need to understand your employer’s expectations and guidelines for drug and alcohol use.

How long do you lose your CDL for a failed drug test?

DOT drug and alcohol violations stay on a driver’s record for three years, although employers must maintain certain drug and alcohol testing records for at least five years, including positive test results. At the time of my failed drug test, no easily searchable federal database exists for employers.

Do they watch you pee DOT drug test?

Drug Testing After an Accident

After having an accident, there are different requirements for the trucking drug testing. The Federal Motor Carrier Safety Administration requires testing of the truck drivers only in specific circumstances. But, many trucking companies automatically administer a drug test to any driver involved in an accident for insurance purposes.

If a commercial driver receives a citation for an accident, the employer has to perform a drug test. If there is any human fatality involved, then the driver must be drug screened, even if he is not cited.

Can I fight a failed dot drug test?

The United States Department of Transportation (DOT) mandates that if you fail a DOT-required drug test, you must be removed from your safety sensitive DOT covered position. Then you must see a Substance Abuse Professional (SAP).

Earlier, urine testing of truck drivers was accepted protocol at all trucking companies. Then, a new federal bill aims to include hair follicle testing for truck drivers in 2016, where testing the hair is considered to be more reliable than urine testing. Many types of illegal substances remain in hair follicles longer than they remain in the body; hence hair test proved to be more reliable.

In 2008, J.B. Hunt established its own hair testing policy; from that day onwards, they do not need to have any post-accident positive drug tests. This procedure becomes federal law. The number of companies that use this type of drug testing methods may increase in coming years.Last but not the least,  you know how often do truck drivers get drug tested?