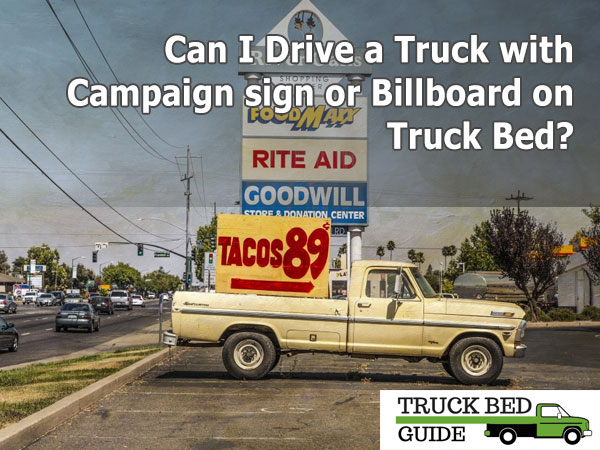 You might want to turn your pickup into a mobile billboard after all the bed is empty all the time, so why not use it. Well, it is possible in some states or cities but could be illegal in other states or cities. So, if you can drive a truck with a billboard or not largely depends on the state you live in and how you put it together.

Can I Drive a Truck with Campaign sign or Billboard on Truck Bed? It depends on the city or the state you live in. In most places it is illegal and in some cities it is legal. You can have customized LED lighting, sound system, and product sampling features but it could be illegal in other states. So, it is better to check up with your local mobile billboard laws to make sure you’re not in trouble.

Most mobile billboards or ad billboard on pickup truck are dedicated, customized LED pickups with a large bed for displaying ads. Many could be having an external sound system, illumination, LED panel, product sampling, etc. That said, it is worth noting that it is illegal in many cities. On the other hand, digital mobile billboard trucks and static mobile billboards have become more popular.

Other types of cost-effective mobile billboards are installed wraps on trucks and trailers. On the other hand, a box-type truck with panels closing the cargo space can also be turned into a mobile 3D display. Companies primarily use these trucks for parades, product launches, display furniture or for mass awareness.

Truck bed billboards are designed to fit conveniently into the bed of a pickup truck. Although it can be made as a freestanding billboard, it can be used in a truck with the extended bed as well for larger billboards. You only have to tie them to the truck bed tie down or to the frame. This is a cost-effective strategy for businesses who want immediate exposure.

Some of the best benefits of having a pickup truck bed billboard are that it is easy to use and transport; it’s light-weight and compact; it can be set-up in minutes; they fit in almost all truck beds, can be wrapped just as fast. They are also one of the best strategies for static display which is not meant for mobile use.

The design is primarily dependant on factors such as location, budget, and the type of product being promoted. It takes in a lot of market research to help in the design process. The research firm will supply information such as a number of people, traffic patterns, and data using GPS, the location data and others to create the final design of the billboard that will go on the truck.

Bed billboards are a great option because they don’t have to be tied down to anything. It can simply be placed on a truck bed and secured with some cords. This type of outdoor advertising can also be used on any other flat surfaces other than the truck bed. The billboards can immediately be turned into static displays or overhead displays without much modification. Some of the billboards are higher which makes it visible in the parking even if the parking is heavily dense.

Many business owners use them as mobile ads in trade shows and other temporary events. Some use truck bed billboards as on-site outdoor advertising. These banners follow anywhere the truck goes. These billboards can also be fit into a showroom for additional indoor marketing.

According to industry analysis, the outdoor mobile billboards have over 95% recall rate and over 96% of respondents said that mobile ads are more effective than traditional outdoor ads. According to 3M and American Trucking Association, nearly 90% of the target audience noticed the text and graphics on that truck ads. The billboards result in a sales increase of nearly 100%.

What Can We Learn from the California Laws

Companies filed suits in courts claiming its freedom of speech which is guaranteed by the First Amendment was violated because of the ban on mobile billboards. The cities won and then the companies appealed to the US Court of Appeals, Ninth Circuit.

This suggests that the government can impose time, place and manner restrictions on speed in public areas as long as the restrictions are content neutral. U.S. Supreme Court quoted:  “If a municipality has a sufficient basis for believing that billboards are traffic hazards and are unattractive, then obviously the most direct and perhaps the only effective approach to solving the problems they create is to prohibit them.”

SEE ALSO:  How much does commercial truck insurance cost?Read This First !

Other billboards that are still legal to use include stationary billboards, bus benches, newspaper, handbill, painted signs on vehicles, bumper stickers, etc. However, mobile billboards on private lands are not discussed in the case.

How Much Does it Cost to Advertise on Mobile Billboards?

Physical billboards cost nearly $250 per month in rural areas; nearly $4000 in small cities and over $15,000 in large markets. Depending on the location, digital billboards can cost up to $15,000.

As stated above nearly 97% of people were able to recall the ads and recognize a brand. It is two times more effective than static billboards.

What are Billboards and Campaign Sign Boards Made from?

Most common truck bed campaign sign boards are made from an extruded twin wall corrugated polypropylene sheets called the Correx.

What Size Should be the Letters on the Billboard Signs?

The usual size is 1 inch of letter heights which gives 10 feet of readability and the best impact on the readers.

How Much Does it Cost to Make a Billboard for a Pickup Truck?

Although it highly depends on the material used, city and the brand marketing their products, typically it can cost well up to $5000 for a medium size billboard on pickup trucks.

As the saying goes, a picture is worth a thousand words and it is definitely true when it comes to billboards. Billboards are a great ad campaign but with the ban of mobile billboards on public lands, companies have started moving it in the private lands. Obviously, that’s not the case for all states and cities and they all have their own versions of restrictions. Still, there are firms who operate mobile billboard smartly without breaking any laws. After all, it not only brings a lot of money, it’s fun too.